The Welsh Wire: Nolan Finley and Stephen Henderson of The Civility Project 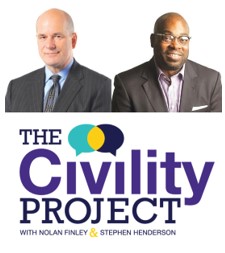 Is it possible to have civil conversations with people whose politics you disagree with? The founders of The Civility Project, celebrated journalists Nolan Finley and Stephen Henderson, believe it can be done, and they bring their message of disagreement-but-mutual respect to a west Michigan webinar on Sept. 15 from 12:30 to 1:30 p.m.

Sheri Welsh previewed the webinar when she interviewed Finley and Henderson for this week’s The Welsh Wire podcast.

The Civility Project webinar at on Sept. 15 from 12:30 to 1:30 p.m., will teach participants how to agree to disagree, engage in civil conversation, build respect for each other’s humanity, learn to listen to other sides, use what you hear to challenge or affirm your own viewpoints and stay curious.

The Civility Project is sponsored by Delta Dental.

Learn more about the Civility Project webinar in this week’s The Welsh Wire podcast. Listen to the full interview with Finley and Henderson.