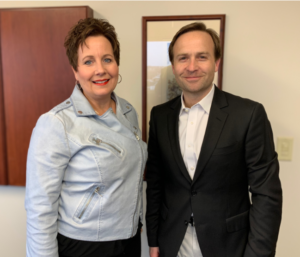 Right now many members of our community are navigating unexpected career changes or are evaluating taking their skills down a different professional path. While this may seem daunting and worrisome, we wanted to share encouraging insight from one such individual who recently underwent a mid-life career change.

One of Michigan’s most experienced and popular public servants recently went through a career transition. Brian Calley had the honor of serving as Michigan’s 63rd Lieutenant Governor from 2011-2018. Prior to this appointment, he was a two-term state representative. However, after an unsuccessful bid to become the GOP gubernatorial nominee in 2018, Calley switched gears professionally.

Calley returned his focus to his business background which includes a bachelor’s degree in business administration from Michigan State University and a Master’s in Business Administration from Grand Valley State University. In January 2019 Calley joined the Small Business Association of Michigan (SBAM), where he currently serves as president and leads the group’s lobbying and communications efforts

Calley recently discussed his thoughts on career transition in an interview with Sheri Welsh for The Welsh Wire podcast.

“The role of SBAM and the way that my background has prepared me for this, it really feels so natural, like everything came together and in my life path in a way that just uniquely prepared me for this specific organization,” he says. “And it’s really cool to think about it in those terms.”

Calley says the move to SBAM really improved his quality of life. “I look very fondly at my time in state government. I am so thankful to have had that opportunity, to serve in that way. And now I’ve found something that has given me the ability to still be involved in the political and policy making world, but also to have a life.”