The Welsh Wire: Von Washington Jr. of The Kalamazoo Promise 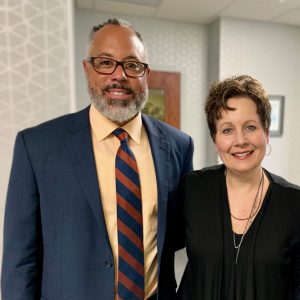 The Kalamazoo Promise announced they have signed an agreement with the state’s largest skilled trades union – the Michigan Regional Council of Carpenters and Millwrights (MRCC) – to expand the Promise to include skilled trades apprenticeships with the MRCC’s Joint Apprenticeship Program.

“We’re hearing it every day that there are not enough people coming into the workforce that have this type of training, have the vocational education behind them, the certificates, or the skills to come in and make sure that we have the things that we need,” says Von Washington Jr., executive director of community relations for The Kalamazoo Promise. He talked about the new program with Sheri Welsh for The Welsh Wire podcast.

“We were approached by the MRCC — they have a new facility in Wayland — and they wanted to explore a partnership, and what it would look like for us to support Promise students through their scholarship to go up there through the four-year apprenticeship program and help them get those skills and lead to great careers,” Washington says. “And it really was a no brainer for us. We’ve known for many, many years, since the inception of the scholarship, that everyone won’t go off to college. But there are great careers everywhere.”

The benefits to Kalamazoo-area businesses? Job-ready workers. “The beauty of an apprenticeship is that you’re doing some classroom time, and that’s what we compensate for. But they’re also on the job. So they’re doing job time. So yes, they are ready to go. They’re already on the job. And in many cases, now, they’re offered a job in the organization that they’re in, nobody really wanted to let them go. So they are ready to go. And they’re learning immediately.”