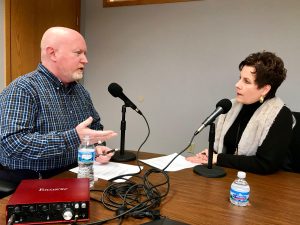 When you’ve been around for over four decades and been known by the same name that entire time, it’s a bold decision to reboot with a new company identity. But Lake

Michigan Mailers, a Kalamazoo data document and distribution services company now called Marana Group, believed that a new name was needed to reflect the fact that in 2019 the company doesn’t just mail stuff — it provides a broad range of data, document, and distribution solutions, according to David Rhoa, company president and son of the Marana Group founders.

Rhoa talked about the process of rebranding with Sheri Welsh for The Welsh Wire podcast.

“Our biggest concern, and we vocalized this in the very beginning, [is] we do not want to give the feeling that we’ve been sold or purchased,” Rhoa said. He addressed that concern in part by commissioning a video by Cynthia Kay & Company (Kay has been a frequent guest on The Welsh Wire.)

If you want to be successful in re-branding your company, focus on effective communications, he says.  “My advice that I would give to others is that it’s more than just a press release. It’s a complete communications program with everybody from your shareholders and stakeholders and your associates, all the way to your most important client or your most important vendor. Make certain that the message that you’re sending out is your message, in your voice, directly to customers and vendors in the community in a way that makes sense to you.”

Rhoa also suggests that you get professional help in your rebranding efforts. “You don’t have to do the heavy lifting yourself. There are people who do this for a living. It’s a thing that you’re going to do once, maybe twice in a company’s life-cycle, as far as naming and branding a company or naming and branding a product. But there are people who are out there who do this everyday — so you don’t have to do this alone.”